As of 1 July 2015, employers can issue three fixed-term employment contracts over a two-year period. When either the fourth employment contract in the series is signed, or if the maximum period of two years in service is exceeded, the contract then becomes one of indefinite length. Attention: the sequence of contracts only resets to zero if there is at least 6 months between two contracts.

Important! The Catering CAO allows shorter interim periods for seasonal labor based on climate and nature. After short term seasonal labor has been completed, employers can then revert to contract lengths of more than three months. 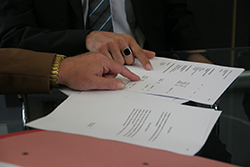 As of 1st January 2020, the maximum period will be extended from two to three years. The maximum number of contracts within this period remains three, and the interruption period also remains set at six months. With a collective labor agreement this period can be shortened to three months.

If the employment contract is shorter than one month, the total amount of gross salary paid is used as the starting point. Please note: if you have already stated in the employment contract that the agreement will be terminated at the end-date specified in the contract, you will automatically also owe a transition payment, because the contract will therefore be terminated at the request of the employer.